Don’t Hold Back! Your Island Life Awaits in Ambergris Caye

Many people seeking the island life gravitate towards the islands in the West Indies or the Eastern Caribbean, but there are so many options out there. For instance, the Western Caribbean nation of Belize hosts a number of locations that make a great island lifestyle possible, including Ambergris Caye.

Once the decision to move down to a gorgeous tropical destination to live out your tropical lifestyle dream has been made, the real work can begin. And of course, start first with investigating all there is to know about living in Belize. 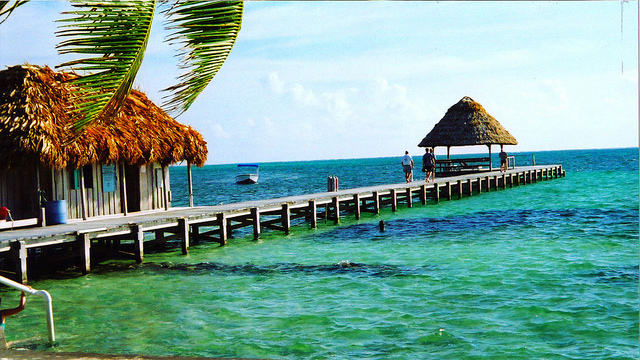 We think a good place to start is Ambergris Caye. There are plenty of homes for sale for reasonable amounts of money, but that’s not the only reason to live there. Belize has plenty to offer, including English as its official language, an established expat community, and great ecotourism opportunities for fun in the sun.

From Fishing and Farming to Shopping and Fine Dining

Many of the island’s locals include immigrants from Mexico, as the island was once a large coconut producer and fishing town.  Only recently has that changed as Ambergris Caye has become largely dependent on tourism.  It’s the largest island in Belize (out of over 200), 25 miles long and over a mile wide in some spots.

The water there is the beautiful blue for which the Caribbean is famous.  The second largest barrier reef in the world (over 190 miles long) protects the island and the coastline of Belize.

Though the island is quite long, San Pedro Town is the only part with inhabitants. The town itself is only a mile long and a mile and a half wide.  You’ll find a lot of the usual tourist trappings here: gift shops, bars, and fancy restaurants for those on vacation. However it’s far from feeling “touristy.”

Many people enjoy Ambergris Caye because they want the beach life, but they don’t want to live in a high-rise on South Beach or another built-up paradise.  They love it for its simple charm.  Like the dirt streets that are constantly watered down to prevent dust or the frequent hum of golf carts zipping by. Some buy land and build their own home, and find their creative spirit, like creating art from the driftwood that runs up on shore.

The simplicity also helps with keeping costs down.  For example, $50 per year for golf cart insurance beats the heck outta hundreds or thousands for car insurance. And in this case, remote and simple doesn’t have to mean disconnected.  Reliable internet service makes it easy to keep in touch with family back in the U.S. or operate a business from your home.

Quality medical care is also readily available and affordable.  Dental procedures cost only in the tens of dollars, compared to a few hundred back home. 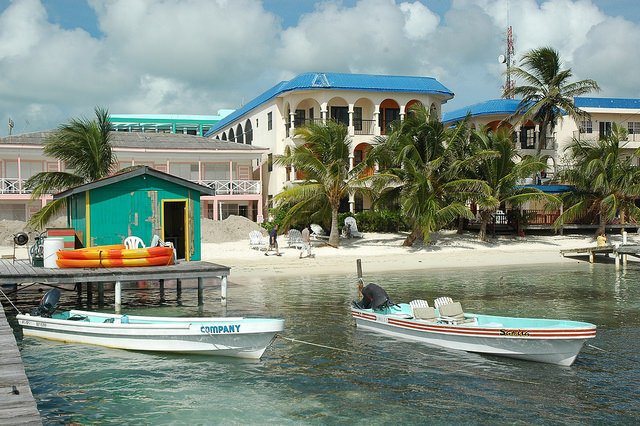 Affordable, But Not Cheap

While we’re on the subject of cost, you may be wondering how much it really takes to live in Ambergris Caye.  The truth is that, while it is one of the more expensive places to live in the country, due to its beautiful beaches and pleasant surroundings, you’ll still be saving a significant amount in comparison to the United States. And, just like anywhere, costs can vary greatly depending on your location and lifestyle.

Home costs can run as low as $300 a month for a basic house or apartment, but beachfront condos can run in the thousands of dollars. It is much cheaper over time to own the home, especially since property taxes are incredibly low.  Electricity and other utilities may be expensive, depending on the usage. You can cut down costs by getting energy efficient appliances, and using air conditioning sparingly.

Groceries can be cheap, if you stick to non-American brands and a red meat-less diet. Alcohol is relatively cheap, but your wine habit may cost you a pretty penny. There’s a wide selection of consumer goods on the island, but anything else has to be shipped, which adds some additional costs.

One expense you’ll need to consider is getting to and from Ambergris Caye when visiting family back in the States. JetBlue, Spirit, and Southwest Airlines have made a run at many Caribbean and Central American nations, offering return flights for under $300 in some cases from as far as New York City.  Belize, on the other hand, has fewer competitors vying for the destination, so you’ll see a lot fewer “flight deals” than to other places in Central and South America. 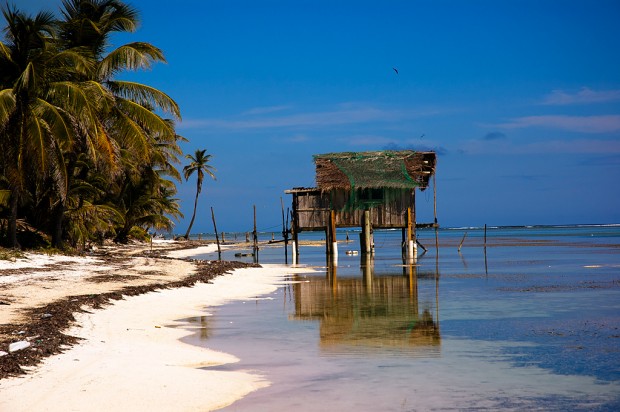 Stay Busy (or Not) on Ambergris Caye

If you’re worried about getting bored on Ambergris Caye, you may want to check out your priorities.  With the aforementioned second-largest barrier reef on earth, you’ll find plenty of diving opportunities around (ever heard of that little thing called the Blue Hole?).  Shark Ray Alley also allows you the opportunity to swim with sharks. And, with such a healthy reef just off the shore from your home, sport fishing is a popular activity in the area.

For land lovers, there are things to do on shore as well.  If you’re an epicurean, there are dozens of restaurants that may tickle your fancy.  Or, if you’re interested in nightlife, there are several late-night bars providing entertainment for tourists and locals alike.

There are even a few attractions underground!  Since Ambergris Caye is a limestone atoll, there are actually caves that you can explore to escape the heat. Other eco-opportunities include Bacalar Chico National Park, Marco Gonzalez Maya Site, and escaping to the mainland of Belize which features an incredible amount of ecotourism, including cave tubing (yes, you read that right!).

Or, if a little relaxation is all you’re after, there are plenty of opportunities to just kick back and enjoy the beautiful vistas and the soothing sounds of the Caribbean waves and wildlife.

So, is Ambergris Caye the island for you? It combines the Caribbean island life, coupled with some authentic Belizean culture.  Read more of what we’ve written about this Caribbean paradise, and see if you can make your island life a reality today by moving to Ambergris Caye.

4 thoughts on “Don’t Hold Back! Your Island Life Awaits in Ambergris Caye” 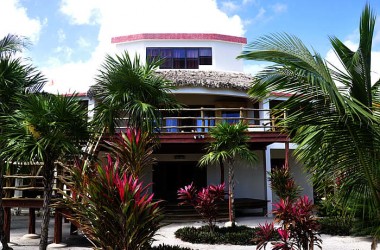 Ambergris Caye
You have got to see this beautiful 5 bedroom, 5 and a half villa! This house has a giant living/dining room, and a spacious gourmet kitchen. The main floor has ...
For Sale
5 beds
5.5 bath
Building Size:5,500 sq.ft.
$725,000
View Property