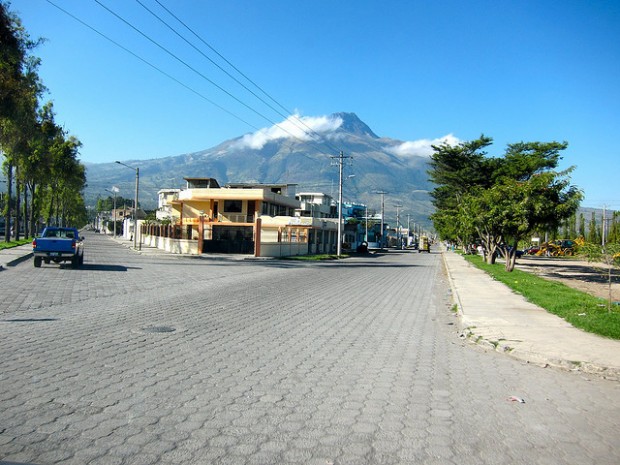 Far from the vibrant commercial and cultural centers of Guayaquil and Quito, Ibarra, Ecuador offers a potential for a different, more laid-back style of living that can appeal to expats seeking a change of pace from other hubs in Central and South America.

Known as “the White City” due to the many colonial style houses with white paint and red roofs, Ibarra is located in Northern Ecuador at the base of the Imbabura Volcano. This quiet community of roughly 150,000 provides a unique opportunity to immerse oneself in the culture of Ecuador – both past and present – that may provide an alternative to the “typical” expat experience.

Birthplace of an Emperor and a Country

The suburb of Caranqui, known locally as the ancient center of Ibarra, is said to be the birthplace of the last great Incan Emperor Atahualpa. After the Spanish settled in Quito, Don Miguel de Ibarra, the first Governor of the Kingdom of Quito, sent Cristóbal de Troya y Pinque to found the city of Ibarra (named in his honor) on September 28, 1606.

And from a Coconut, a New City Grew

Following the almost complete destruction of Ibarra, Ecuador by an earthquake in 1868, a German planner arrived in the devastated town and, using a surviving coconut palm tree as the center point, surveyed what would become Ecuador’s youngest community when it was re-founded on April 28, 1872.

Ibarra Is Not Your Typical Expat Destination

While Ibarra, Ecuador has a lot to offer the enterprising expat, there are several aspects to consider before making a commitment to relocating to this Andean gem. Ibarra is not for everyone. Learning about the city and the surrounding area is a great way to see if Ibarra is a good fit for the future and investing in Ecuador Real Estate.

A Two to Three Hour Drive from Quito

There are buses, taxis and car rentals available in Quito that can transport you to Ibarra. Expect the trip to last roughly three hours; road conditions and weather could make this a longer journey.

Buses are the least expensive with the trip running $2.50 per person. Since these are public conveyances, there is no way to guarantee seating and maneuvering with luggage may also be an issue.

Taxis are the more private (and more expensive option) with a one-way trip averaging in the $50-$60 dollar range; this would not include the tip. Taxi Lagos does specialize in shared rides at a cost of $8-$10 dollars per person. Again, however, the luggage situation could rule this out as an option. Also, the language barrier may lead to some confusion in trying to give directions.

Car Rentals – Probably the most expensive option. Unless you are comfortable driving in Central and South America and either speak Spanish or have a GPS this should probably be the last option to consider.

The Positives of Ibarra

Ibarra, Ecuador has a lot of positive elements that make it a desirable location to consider for a relocation opportunity or potential investment. The old adage about “location, location, location” can easily describe the upsides of Ibarra.

Ibarra’s location provides an alluring combination of highland beauty, lush gardens and a reasonable distance to the capital city of Quito while retaining the quaint vibe of colonial Spain.

Unlike so many other Central and South American locations, Ibarra’s weather is pleasant and moderate. There are basically three seasonal climates; warm, cool (at night) and hot.

There isn’t a lot of variation in temperature with highs being in the mid-70s to occasionally reaching the 80s during the day and comfortable sleeping temperatures in the mid-to high 40s to low 50s.

Not surprising for a location so close to the Equator, Ibarra does have a humid climate and annual rainfall can range from an average of less than an inch per month during the dry season (June through August) to three inches per month during the wet season (February through May).

One of the most attractive features of Ibarra, Ecuador is the extremely reasonable prices for properties. Whether you are looking to rent or buy as an investment the prices are certainly much less than in some of the larger city centers.

As with any other destination, the first step in buying or renting is to decide how much space you need. Do you want to be in the city center or in one of the adjoining neighborhoods? How much space do you need? Regardless of how these questions are answered, Ibarra, Ecuador offers great real estate potential.

A one bedroom apartment in the city center can rent in the range of $120-$150 per month; the same unit in one of the surrounding neighborhoods can go for $100-120. Three bedroom units are equally affordable; $300 in the central district and $220-$240 outside.

Buying As an Investment – A True Economic Option

Prices per square meter on properties within the city can range from $600-$700; an 85 square meter (900 square feet) could run a very reasonable $51.500 to $59,500. With monthly utilities (including heat, electricity, water, garbage, cable, and internet) under $100, real estate investment in this expanding community could be a profitable way to fund a retirement or provide additional income.

With new and improved roads going into Ibarra and its surrounding communities, the potential for new business and commerce will also expand. Additionally, high-speed internet and cable services continue to enhance the connectivity needed in a 24/7/365 business environment.

Ibarra is home to two universities, Catholic University and the Universidad del Norte, whose students add a youthfulness and modern counterpoint to the colonial vibe. In addition, the blend of Afro-Ecuadorians, mestizos, and indigenous members of the highland tribes provide an exciting and diverse experience that visitors and residents can share and participate in. 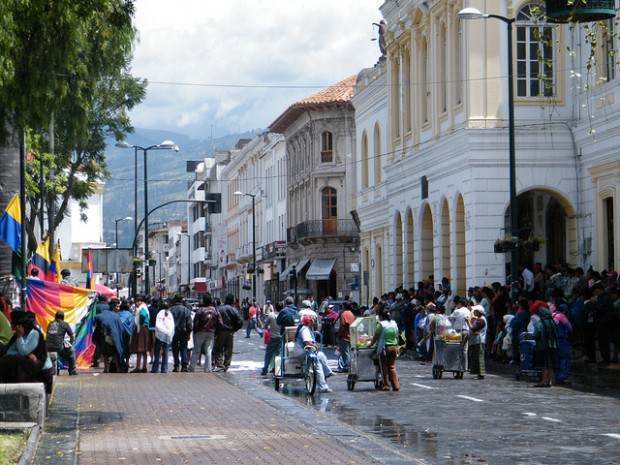 Points of Interest in and around Ibarra

Exploring Ibarra, Ecuador and experiencing elements of the local culture is perhaps the best and most exciting way of become part of this growing community.

Saturdays are market days when local farmers, craftspeople and artisans bring their wares into the city center to display and sell. The sights and sounds of the market will transport a visitor back to the days of colonial Spain.

Like many Central and South American towns, Ibarra’s festivals are an important part of the culture of the community. Marked by celebration and parades, Ibarra’s two main festivals are “Virgen del Carmen” held on July 16th and the most popular one “The Festival of the Lakes”  which takes place on the 24th through 28th of September each year.

Even in paradise, there are potential downsides that could make relocation or investment in Ibarra an option that may not meet everyone’s expectations.

The Challenge of Getting There – No Direct Flights

Perhaps the major stumbling block in relocation to Ibarra, Ecuador is the fact that there is no major airport in the city. The closest international airport, Mariscal Sucre International Airport, located roughly 70 miles away (via driving) in Quito, has both international and domestic flights.  A smaller airport, Teniente Coronel Luis A Mantilla Airport, located in Tulcan – slightly farther away at 77 road miles, handles a more limited schedule.

Ibarra does have a private jet charter airport, Atahualpa Airport, a little more than a mile outside the city center.

Much less English is spoken in Ibarra than in the larger metropolises of Quito and Guayaquil. If you are uncomfortable with trying to learn Spanish and do not have friends or partners who can speak the language, much of what this colonial center has to offer may be more of a task than a treasure and immersing yourself in the society may be extremely difficult.

While Ibarra is a growing destination, the expat community is much smaller than in the major centers of Ecuador. Although this provides a wonderful opportunity to truly become a part of the town’s daily life, not having a large number of fellows expats as a kind of support group may make the transition from visitor to resident a challenge.

Is Ibarra Right for Me?

As with any new location, there are positives and negatives that should be taken into consideration before deciding to uproot your life and relocate to Ibarra, Ecuador. Ultimately, the best way to make such an important decision is to plan a visit. Research online and begin your adventure with an open mind. Once you arrive and immerse yourself in the ebb and flow of the city, the answer will make itself clear. 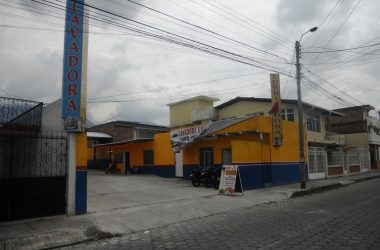 Ibarra
Ecuador
This Car Wash business is located in a busy commercial area of Ibarra, just 2 blocks from the bus terminal. It has entrance from both sides of the roads. Fully ...
For Sale
1.0 bath
Land Size:0 acres
$299,000
View Property 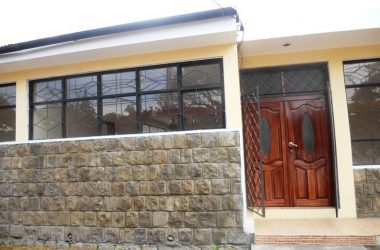 Ibarra
Ecuador
This property is located on one of the prestigious locations in Ibarra. It can be used for various purposes. It has 4 bedrooms and 2 bathrooms. You can run it a...
For Sale
2.0 bath
Land Size:0 acres
$255,000
View Property 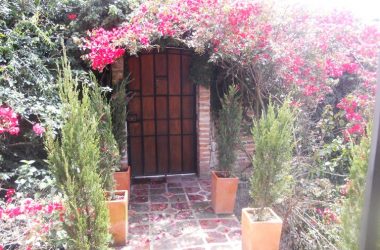 Unique Complex of a House, Spa Business and a Guest House

Ibarra
Ecuador
Built by an architect for his family, this charming property will get your attention captured from the minute you walk there. It is located in the exclusive se...
For Sale
4.0 beds
5.0 bath
Land Size:0 acres
Building Size:5,490 sq.ft.
$420,000
View Property
See All Listings In The Area
Share2
Tweet
Pin
+1
Share
2 Shares
Free Tropical Toolkit
Free 200+ Page Report: Top 57 Places to Live & Invest