By Viva Team in All Countries
Share
Tweet
Pin
+1
Share
0 Shares
Panama’s recent political and social confrontation, along with an unsustainable increase in public spending could cause a revaluation of the country’s investment grade. President Martinelli has little political capital, which analysts believe will result in a difficult political environment for the remainder of his term. Therefore, some say it is time to review the projections for Panama, because there appears to be little commitment to fiscal responsibility by the government and unwillingness to adhere to the necessary measures to maintain its rating.

The political instability that exists in the country and increased borrowing would affect the level of investment that is Panama, warned experts on the subject.

A first indication of these effects can be reduced foreign investment in the first quarter fell 15.3%, analysts say.

In March 2010, Panama became the coveted investment grade by the rating company Fitch Ratings, which raised the rating from BB + to BBB-with positive outlook.

“The investment grade rating of Panama and sustainability it can be affected when the political climate overflows in actions or steps to make such relevant institutions in the state of law,” said Raul Castrellon, CEO of Equilibrium.

“But even more, the dynamics of income and spending or lending capacity. However, strict adherence to the analysis of economic fundamentals of Panama, I think the rating is well supported by the solvency of the state and prospects, “said Castrellon.

The degree of economic analysis entails investment of many things, among them the legal security of a country and the political environment, said Alvaro Naranjo, financial advisor Geneva Asset Management, for what he said, instability “does affect.”

Naranjo argued that the rating is determined by the liquidity and risk. “At the risk is implicit political will.”

All went well with the ambitious government plan, detailed, but it hurts that affect legal certainty and the Board changes V, or a shift in economic policies as the sale of land in the Colon Free Zone and shares of joint ventures .

“From time to time increase the deficit, the indebtedness or turnkey projects, is not well seen by rating agencies,” he said.

Ernesto Bazan, risk assessor independent firms, he said, based on their experience, rating agencies have a quantitative emphasis, rather than social political confrontations that have been reflected in the country, if you evaluate the fiscal deficit of Panama .

“We are in danger of meeting the fiscal responsibility law, and this could be a warning to reassess the rating that the rating of Panama,” he said.

Economist Philip Chapman said he was concerned about the climate of confrontation.

“I do not think this alone impair the sovereign risk rating, does not contribute to improve it.” He added that we must maintain good financial risk assessment of sending “clear signals of fiscal prudence.”

In the medium term, “the increase in public spending and the deficits we have been experiencing chronic they can affect the rating. Above all, if at some point the growth of the economy cools. ”

In its recent report on investment in the country, the bank cites the Minister of Economy and Finance, Frank De Lima, who admitted that there is a financial gap of $ 400 million and that failure to sell shares, you would need to cut in the budget.

Referring to the statements of De Lima, UBS posits the question: “Is not that what we need fiscal responsibility, considering that the capital expenditure is at 9% of gross domestic product (three times the regional average), the economy is exploding and the external environment is full of risk? “.

UBS points out that recent rejections unpopular policies of President Ricardo Martinelli, such as the possible sale of shares in companies such as Cable & Wireless, has undermined the credibility of Panama in terms of prudence and fiscal responsibility.

According to UBS, the fact that Panama has made changes to the deficit ceiling in less than 15 months, “clearly suggests the government’s unwillingness to adhere to fiscal responsibility, which means adhering to the rules imposed from the beginning “.

He adds that there is a serious risk of inflation in the country.
The report concludes that Martinelli has little political capital, which they think will result in a difficult political environment for the remainder of his term. Therefore, UBS believes it is time to review the projections for Panama, because there is little commitment to fiscal responsibility and unwillingness to adhere to the necessary measures. 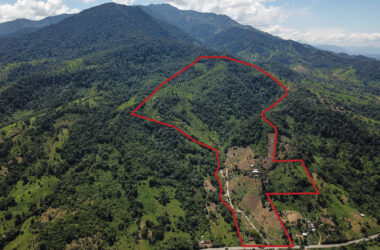